The Fake Series has been developed in the context of the artist residency and exhibition ひゅう～どろどろそうぞうのやしき in Miyoshi/Japan. The participating artists were dealing with the topic of yōkai, translatable as ghosts, supernatural monsters, demons or energies. Tsukumogami are a specific kind of yōkai which derive from manmade objects, such as kitchenware, material, tools and everyday objects, that become alive. Tsukumogami often appear as new, or otherwise pristine condition despite their age.

During my research in the village, I noticed the common use of adhesive sheets or printed plastic to camouflage certain objects as being made from another material. The idea of an object pretending to be something else or being made from another material led to a series of intervention mainly inside the old Japanese house the artists were living, working and exhibiting.

The Fake Series include the works Marble Floor, Marble Door, Wood on Wood and Obento 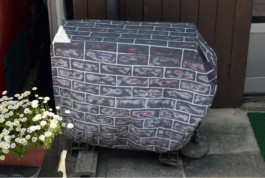